[The source is also now on GitHub]

I really like MUBI a moving 30 day window of hand curated films for the price of a coffee, or as they like to describe themselves ‘an online cinema’.

But despite being a member for some time now and reguarly checking the iPad app for new films. I found myself rarely streaming the films direct from MUBI’s site, as my main film watching platform is a dedicated HTPC running Kodi.

Someone had previously written a very nice and feature rich MUBI plugin for XBMC. However it was now i) broken and no longer being maintained and ii) was built against an older version of the site, prior to the introduction of a 30 day selection window and the phasing out of the old pay-per-film model, so much of it’s funtionality was no longer relevant and/or broken.

But that gave me the incentive to look at using a mix of Beautiful Soup (to handle the scraping, MUBI doesn’t have a public API I assume due to rights issues) and XBMCSwift2 (to make the addon code slightly cleaner and easier to test from the command line).

Anyway, after a couple of false starts, a bit of request/response interrogation using Charles and some trial and error, I managed to get everything working. Although this is my first XBMC plugin, first time using BeautifulSoup or XMBCSwift2 and the second thing I have written in Python of any consequence, so it’s undoubtable a little rough round the edges.

I haven’t pushed this out as an official XBMC plugin, nor do I have any plans to. But if anyone wants to download my code/plugin then feel free to do so. Just don’t ask me (or MUBI) for any support on it, although feel free to add feedback or let me know if it’s broken for you (just don’t expect an immediate fix!). It’s highly likely to break again next time MUBI change their site and I certianly don’t want to get into a cat/mouse situation trying to keep it up to date, especially if they are unhappy with the idea of a 3rd party XBMC plugin accessing their service.

You will need a MUBI account to use the plugin, you can sign up for a 30 day trial here. 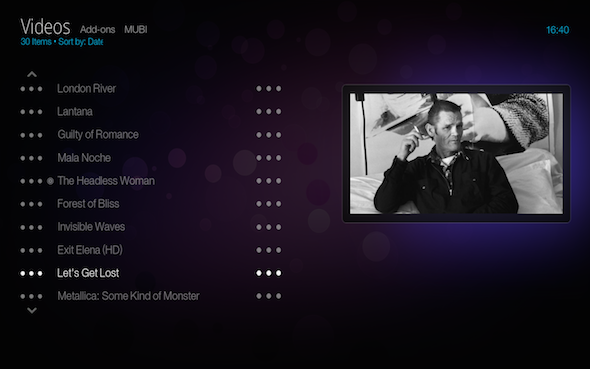 Footage from a RIP warehouse party 21 years ago in what is now our studio. From a documentary entitled Where’s you Child. Compare the dodgy looking alley that was Clink St then with the tourist thoroughfare it’s become today…

Thankfully the studio’s a bit nicer to work in now..

Although we did lug (at 93kg per cabinet ‘lug’ is the appropriate word) a 5kW Funktion One rig up the stairs last Christmas in honour of the studios previous past.

More photos over at the Kitsite blog